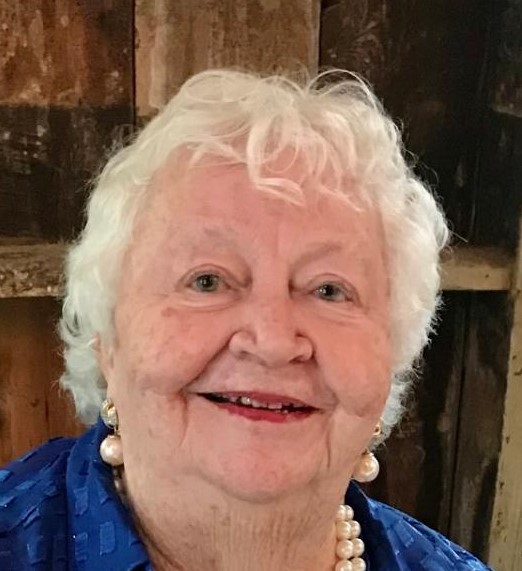 In Lieu of flowers donations are appreciate to the Alzheimer’s Association.
https://www.alz.org/donate

Pat Mulhall passed peacefully on Sunday, surrounded by her family. Just a few months shy of her 91st Birthday, she lived a rich life, full of family and friends she treasured. She had a warm and engaging personality that set people at ease and quickly made them feel connected.
The oldest of three, “Patsy” did not have it easy growing up. A Child of the Great Depression, born in Brooklyn, NY, she lost her Dad at a young age, and her Mom struggled to provide for her, her sister Peggy and brother John.
For a time, her and her siblings attended Ladycliff Academy, in Highland Falls, NY, next to West Point Military Academy. Her Mom, Margaret Wehrum, would work during the week and leave their home in Brooklyn to visit with her Children on weekends.
Eventually, the family settled in Garden City, at 17 Meadow Street, where Pat would spend her formative years, and attend Garden City High School. She met and began dating James “Jim” Mulhall.
Pat’s diaries are full of pictures of proms and formals, with dried/pressed flowers, during Pat and Jim’s courtship. The Brooklyn Daily Eagle carried their Engagement announcement in July 1952, shortly after Jim graduated from Holy Cross and Pat from the Berkeley Secretarial School in Manhattan.
They were married on May 9th, 1953, while Jim was serving in the US Army’s Central Intelligence Corps.
After Jim completed his service, they settled in Westbury and started their family. They would have their first three children there (Patricia “Trish”, Karen, and David) before moving to Smithtown in 1957 and completing their Bunch with Jane, Jay, and Peter.
Jim was working as a Salesman for his Brother Bill’s company, J.S. McHugh in Garden City, which often put him out on the road, and Pat was a homemaker, balancing sports practices, music lessons, scout meetings, school and church functions.
Pat, Jim and the kids embraced life in Smithtown. They were Parishioners at St Patrick’s RC Church, where several of the kids attended school. Jim was a Lector and member of Nocturnal Adoration Society. Pat was a Catholic Daughter and member of the Rosary Alter Society Rotary. Dad was also a member of the Elks, President of the Rotary Club, and Commissioner of the Smithtown Little League. Jim Golfed at Smithtown Landing and Pat Bowled in a Ladies league.
When the kids were all in school, Pat took a position as a Teacher’s Aide at Tackan Elementary School, where she was regularly called upon to draft or proof correspondence for teachers and school administrators. It was the perfect “gig” for Pat, as it gave her summers off to pack up the kids and head to the beach. Mostly it was Short and Long Beach. There were also trips to the Ocean or a week or two in Noyac, Sag Harbor in a rental cottage. Those weeks eventually became a month that the growing family looked forward to all year.
Pat and Jim also loved to travel, somehow managing to see the world, quite literally, with six kids back in the nest. Jim inherited his passion for photography from his Dad and dutifully captured their travel experiences, cataloging them in carousels of Kodachrome slides. There were regular “movie nights” with the family gathered around as Dad set up the movie screen and projector and Pat made the Popcorn.
The kids got older and eventually married and started their own families. This provided Pat with a new moniker, which she embraced: GMa. Having had six of her own, she was very comfortable as the clan grew ultimately giving her 16 Grandchildren and 7 Great Grandchildren. She lost the love of her life, Jim in 2003 and dedicated the rest of her life to being the Matriarch of the family and a kind and caring friend to so many.
Some of Mom’s other passions included walking, where she would keep her eyes peeled for loose change along the road. She also loved to read, listen to music, attend Broadway shows, play Bridge, correspond with distant friends and family, and entertain at parties she regularly threw at 12 Berkley. Theme parties like Hawaiian luaus with coconut shell tops and grass skirts or western night with cowboy hats and toy guns and holsters Pat borrowed from the kids. The kids would be rushed up to bed so Mom and Dad could clear the Den floor of furniture to make room for dancing. There was lots of singing and laughing to put the kids to sleep.
Pat loved the Holidays. Decorating the house at Christmas, hiding Easter eggs and baskets for the Kids and Grandkids, writing Valentine ’s Day cards, dressing the kids in red, white, and blue for 4th of July, etc. But her favorite of all was Halloween. Working in an elementary school gave Pat the perfect excuse to don a costume, which she wore all day. She would Trick or Treat and accept candy, but preferred a scotch, as she made the rounds around the neighborhood, coercing friends to join her along the way.
Pat embraced life with a fierce passion. She was warm and gregarious and was always in the moment with people she loved. She will be missed by so many and has left countless memories for us all to reflect on as we say goodbye to Pat, Patsy, Mom, GMa, GGMa.
Pat is survived by her Kids Trish (George) Herrmann, Karen (Joe) Rauseo, David (Maureen), Jane, Jay (Patti), and Peter (Joan) and her 16 grandkids and 7 great grandkids, as she is welcomed into heaven by her Lord and Savior and her Husband Jim, her Siblings Peggy and John, and her Parents in Heaven.

In Lieu of flowers donations are appreciate to the Alzheimer’s Association.
https://www.alz.org/donate