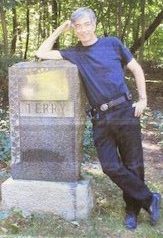 Reynolds, Terence J. of Port Jefferson, NY a physician, passed away peacefully at home after a long illness on June 16, 2022. Dr. Reynolds was in pediatric private practice in Brooklyn, NY for over 30 years. Born and raised in Seattle Washington, he came to New York after attending medical school in France. He was a beloved doctor and friend to many. During his life he was a strong supporter of health care, the environment, France, and the Second Amendment. To honor of his memory, in lieu of flowers, please make donations for an annual scholarship to LIL Memorial Endowment Fund, 131 Brookville Road, Brookville, NY 11545 Cremation private. Arrangements entrusted to Moloney’s Port Jefferson Station Funeral Home, 523 Route 112, Port Jefferson Station, NY. Fond memories can be left at www.moloneyfh.com

*Since 1990 I represented Terry as his New York lawyer. I say New York because he was always a Seattle boy at heart. As is customary my clients usually come to me in times of need and Terry was no different. He on the other hand brought his whimsical personality to my office whenever we would meet to discuss his problems.He was kind compassionate understanding and funny. You had  to understand his view on life to understand how he found humor in even the most unpredictable circumstances.He was an outstanding pediatrician and patriot.He never shied away from hard work but rather embraced it. His patients were the beneficiaries of his knowledge and work ethic.I can’t imagine how many little boys and girls are walking around Brooklyn  today as adults having had Terry as their pediatrician. He touched his patients and their parents in so many ways that we will never know (because he had  patient /Dr. confidentiality of course ) but, although he was an outstanding physician he never made you feel inferior because of his professional standing as a doctor. His inquisitive and compassionate  nature made you feel like you were the most important person in the world. It was never about him, rather it was about you. That’s how Terry made you feel special. It was his lasting gift to us.I will miss Terry.PeaceRobert Carpentier Esq.